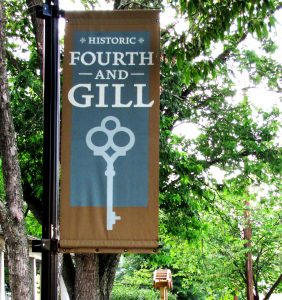 Just north of the Knoxville’s downtown area – roughly bounded by Interstate 40 to the east, Broadway (part of U.S. Route 441) to the west, Glenwood Avenue to the north and East Fourth Avenue to the south – is a fascinating neighborhood known as the Fourth and Gill Historic District. Originally established as a residential area for Knoxville’s upper-middle and professional classes in the late nineteenth century, Fourth and Gill is one of the longest-standing communities in Knoxville and remains one of the best-known historic neighborhoods in all of Tennessee.

From the mesmerizing Victorian homes to the quiet tree-lined streets with sidewalks to the convenient location of booming downtown Knoxville, I don’t find it surprising why Fourth and Gill sits at the very top of the most desirable Knoxville real estate.

A Quick Lesson in History

In the late nineteenth century, the construction of the East Tennessee and Georgia Railroad just north of Knoxville brought about industrial growth to the area now known as Fourth and Gill. As I mentioned before, the neighborhood was initially developed as a residential area for middle and professional classes in the increasing number of mills and factories in Knoxville. Although it later became home to several prominent figures including Tennessee governor Robert Love Taylor, Knoxville mayor Fred Allen, Knoxville city manager Charles Karns, renowned architect Albert B. Baumann, Sr., furniture magnate James G. Sterchi, Swiss-born American author Albert Chavannes and many more.

Like other city neighborhoods in the States, Fourth and Gill started to decline due to the advent of the automobile in the early 1890s, and over time, led to a migration from urban areas to suburbs on the outskirts of Knoxville. Many homes in the neighborhood were abandoned or converted into low-rent apartments by absentee landlords and began to deteriorate. During the late 1970s, however, Fourth and Gill started to experience gentrification and became one of the first neighborhoods in Knoxville to launch a successful urban renewal project, under which many of the neighborhood’s distressed homes were immaculately restored into their former glory.

Today, when it comes to Victorian “painted ladies,” the Fourth and Gill Historic District has some of the oldest and most iconic examples of these elegant homes in the Southeastern United States. The houses in this historic neighborhood exemplify the elegant architecture of the late 1800s to the early 1920s. From homes with grand neoclassical columns to majestic Queen Anne-style houses to stately bungalows, these real-life dollhouses from the gilded age will take you into the past to experience the times and events that shaped them and the families who occupied them. Walking in this neighborhood truly feels like a walk through time.

Things to do / Places to see

There is not a lack of things to do in Fourth and Gill. Because the neighborhood is situated downtown, residents get easy access to all the action of Knoxville’s Old City and downtown-at-large – that means more than eighty restaurants catering to every taste and budget, over forty boutique shops in beautifully restored buildings, festivals, world-class theatres, parks, museums, and extraordinary venues for events and outdoor activities. The neighborhood is also within walking distance to several artisanal, small-batch breweries, including the Crafty Bastard Brewery, Elkmont Exchange, Last Days of Autumn Brewing, and Schulz Bräu Brewing Company as well as many coffee shops like K Brew, Remedy Coffee, Wild love Bakehouse and Vienna Coffee House. Also located right outside the neighborhood is Tennessee’s first full-service food truck park Central Filling Station, and an urban nature park with 10 miles of trails plus bike and canoe rental names Ijams Nature Center. I should also mention that it’s the Gateway to the Great Smoky Mountains!

Strolling through the Fourth and Gill Historic District is a trip back into the past. It is, after all, one of Knoxville’s oldest neighborhoods. Between that fascinating history, the abundance of things to do nearby, and a vibrant community association, Fourth and Gill Historic District makes for a great place to live in and is my personal favorite neighborhood in Knoxville.

Looking for your dream home in the Fourth and Gill Historic District, Knoxville, TN? Contact us today to find out more!

7 Things That Affect What You Pay for Homeowner’s Insurance
September 2, 2020

Should I Consider Selling My Short-Term Rental Property?
August 10, 2020